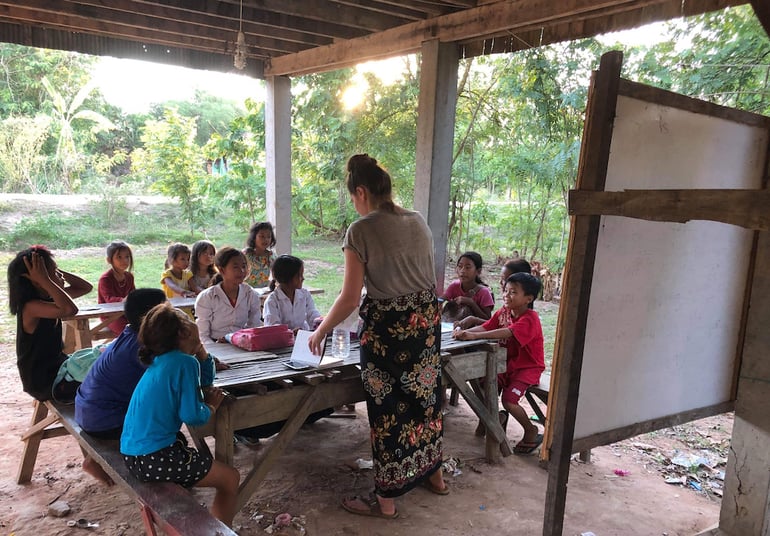 When I was a kid, I loved bike riding.

My mom would take us to the other side of the city, and we would go everywhere. We would ride around in the parks, along the river, spend three hours or more, just riding. When I look back on my childhood it’s something that stands out, but as I got older I stopped riding my bike.

I'd almost forgotten about it until recently—but this time I was far from Eugene, Oregon...

I was in Cambodia.

And instead of wondering which park we were going to, I had very a different question in my head.

Why the heck am I even riding a bicycle?

This thought played on repeat for two and a half weeks as I rode five miles (8 kilometers) to teach English to kids in a Cambodian village. I rode that bike through mud, through rain, and insanely strong wind. I rode this rusty, old, broken bike next to giant trucks on back roads. I rode it at night and was chased by dogs, been so tired afterward that I shoved some rice in my mouth for dinner, showered, and then instantly fell asleep.

Why the heck am I riding this bicycle?

I wondered, again and again.

And every single night Jesus reminded me why in so many different ways.

Whether it was in the drawings my Cambodian students gave me. Or the amazing sunsets I got to watch night after night. The joy on my student's faces as they saw me ride in and their chorus of “Hello Cha!” that I was greeted with. The most insane and stunning lightning storms I’ve ever seen. Or the woman, who after hearing the Gospel for the first time, got rid of her idol’s spirit house—without us telling her to.

I rode that old, rusty, broken bicycle night after night because Jesus relentlessly goes after the one…

and so should we.

I wouldn’t change a single thing about my time in that village. Even if it meant I had more energy, or I had sweat a little less. If I had gotten fewer mosquito bites, or if I hadn’t gotten so sore after riding five miles every day. I wouldn’t change a thing because I got to show unconditional love to those kids. Even when I had none to give because I wasn’t giving from my heart—but from the Father’s.

Just so that they would know that they are loved by their Creator.

That’s why I ride my bike.

Interested in your own adventure?
Learn how to share God’s love in the nations on a Discipleship Training School:
Published at May 31, 2019 . Authored by: Amy McConnell |