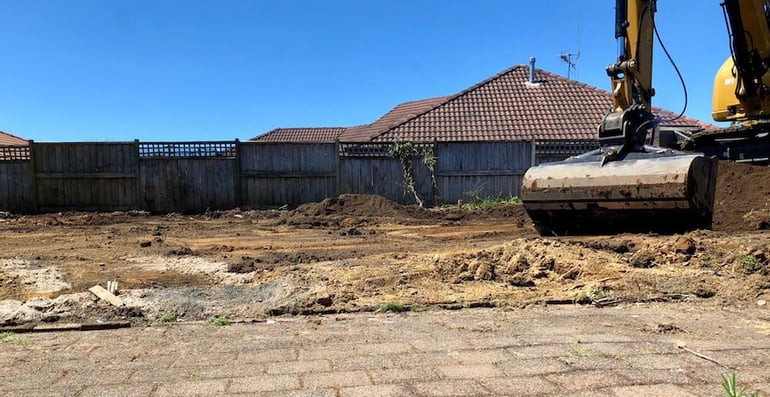 There’s construction happening right outside our front door. The lot that we live on was subdivided, and now a house is being built on what was our front patio. I’ve had some ups and downs with that reality, as most people would. Almost every day I’ve been sitting at the kitchen table, drinking my morning tea, and then suddenly two diggers and a massive truck show up and the entire house starts to shake.

But today, as I was trying to prepare a teaching (pretty unsuccessfully, as it was so loud that I couldn’t hear myself think), I heard God say very clearly:

“You don’t like this construction going on around your house because it’s a reflection of what’s going on inside. The discomfort you are experiencing in the physical is a reminder to you of the discomfort you’ve been feeling on the inside.”

Ouch. The more I thought about it, the more I knew it was true. Because, a little honesty here, I’ve been going through a lot of wrestling in my mind and in my heart. Trying to figure out where to go, what to do, and if I belong. Struggling with a numbness that probably comes from me overcommitting to things that don’t fill me up, but that ‘need to be done by somebody.’ I’ve been living life the past few months with a can-do attitude on the outside, but feeling more and more weighed down on the inside.

And it’s created a bit of a mess in my heart… kind of like a construction zone.

Right now, the yard in front of our house looks like a war zone. It’s muddy and chaotic, and there’s no way of knowing right now what the house they’re building will look like. I haven’t seen their master plan.

And that’s the season I’m in right now. I feel chaotic. I feel out of control. I feel like there is a bunch of stuff being moved around and disrupted in my heart. We’ve all felt that way. But I know that God has the master plan—He’s digging and shaping and moving things around with purpose.

He sees the big picture when I only see dirt.

And that we would lean into the discomfort and the chaos, knowing that our foundation is being built on the Rock that will never break.

"Everyone then who hears these words of mine and does them will be like a wise man who built his house on the rock. And the rain fell, and the floods came, and the winds blew and beat on that house, but it did not fall, because it had been founded on the rock."