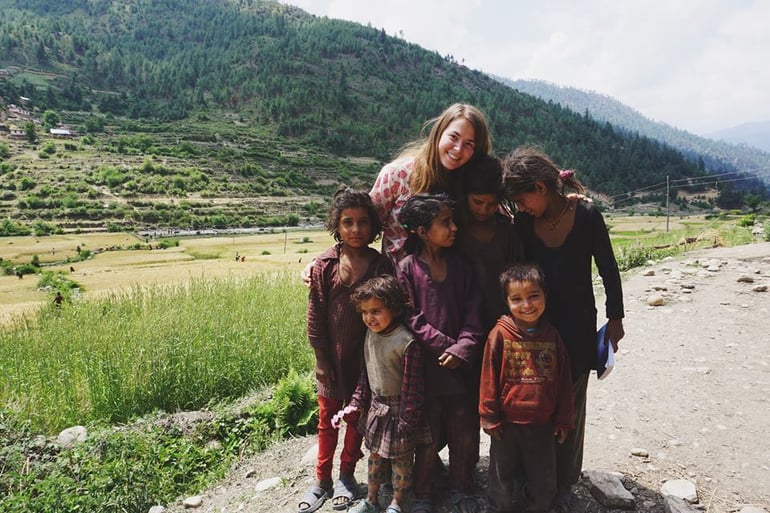 I was standing on a balcony in the middle of the Himalayas.

But I still remember God’s words as I asked Him about why things had gone the way they had gone.

“You’re not done with this place yet.”

At that point, I didn’t know the adventure that was lying ahead of me. But I would surely find out soon.

My whole life I never even had the idea of becoming a missionary. It was a word that was so foreign and so far from everything that I had been taught about growing up. So when I signed up to do a Discipleship Training School in New Zealand, I had no idea what I was getting myself into. I definitely didn’t think my life would get turned upside down the way it did.

It was a few months into my DTS that God first spoke to me about moving to the Himalayas long-term.

It started with a little nudge and was soon confirmed by a dream, God-led conversations, and many other random little things. I ended up going to the Himalayas for my DTS outreach and honestly didn’t enjoy it as much as I hoped I would. It was hard. It didn’t feel like home. I didn’t love it.

But in the midst of it, I still knew what God was calling me to do.

I was just too afraid to commit.

I was too afraid to tell my parents about this crazy plan that was forming inside of my head. How was I going to explain that after being gone for six months, I wanted to leave Germany again? But this time it wouldn't be for just six months. It'd be at least two years. And really there was nothing I had to offer. I didn’t feel like I was qualified or even mature enough to do this. I felt like I had nothing to bring to a team.

During a missions conference, I realized all those thoughts were just plain fear. Even as I was doing my DTS, I was already equipped. Spiritual maturity comes with obedience to God. You hear His voice, you obey His voice and then you grow. You don’t have to be perfect and have it all together to be obedient.

After finishing DTS I went home, knowing that the School of Frontier Missions would start in just a few weeks and that I was meant to participate. The Lord kept asking me:

“Will you lay down your own plans for your life and move to the Himalayas for me?”

Not knowing how to talk to my parents, I procrastinated for weeks. When I finally did tell them they were not happy with my plan. They weren’t really supportive either. They simply didn’t understand. But I realized that no matter how my parents felt, I knew that God was telling me to go and I had to be obedient...

Otherwise, I would forever look back to that moment and regret not saying yes to Him.

And that was all He needed. It seemed like my simple yes enabled God to move in a way He wasn’t able to move in before. Suddenly friends from church started supporting me financially and in less than two weeks I had enough money to buy a plane ticket back to New Zealand. And God kept moving. He totally transformed my parents’ heart and three weeks into the school, I made it to New Zealand. After three months of training, I and two other amazing long-termers moved to the Himalayas.

I’ve been living in the Himalayas for almost 17 months now and it’s honestly been the best decision I have ever made in my life. I know I am where God wants me to be and I am doing what He has called me to do. Not only that, I’ve had the privilege to experience God in a completely different way, in a way that I could not have experienced Him anywhere else. He has provided, proven Himself faithful and He’s been with me through it all—the ups and downs of moving to a different culture.

This I know—if He is calling you to do something He will give you the strength to do it. He will enable you to do it.

And He will get you to where you’re supposed to be.